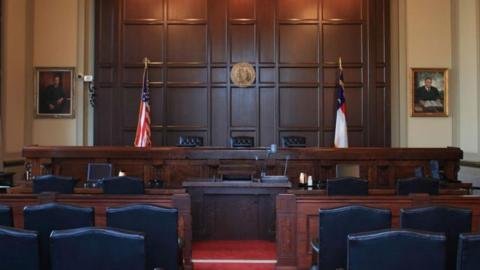 A defamation lawsuit filed recently pits four members of Conservatives for Guilford County against a no-holds barred blogger in Greensboro.

Douglas Adkins, whose wife, Isabella Adkins was once one of the most prominent members of the local political action committee, is listed as the lead plaintiff in a defamation suit against blogger Jeff Martin of Greensboro. (Updated: View a copy of the suit here.)

Martin, who blogs under the pseudonym, Fecund Stench, lampooned Isabella Adkins and the group Conservatives for Guilford County often using a fictional character to relay experiences from the seedy Greensboro strip-club scene.

The character, Tami Tightenloud, was described as a “dwarf, transvestite Hooters waitress” who would often find herself at strip clubs in Greensboro after hours. It was during these fictional encounters that Martin often wrote about members of C4GC.

The lawsuit names Douglas Adkins, Isabella Adkins, Brett Riddleberger, Jodi Riddleberger and C4GC as plaintiffs and seeks compensatory and punitive damages in excess of $10,000, the threshold required to file a case in superior court. In the filing, the plaintiffs demand a jury trial.

The attorney for the plaintiffs, Krispen Culbertson, filed an additional summons on May 1, listing two more addresses for Martin. Deputies served the suit on Martin on Friday morning.

The suit contains three lengthy paragraphs that quote from Martin’s blog. Of note is that the filing cites an incorrect internet address as the location where Martin published his content.

The first complaint references a post made in May of 2013 where Martin envisioned C4GC members’ celebrating the 50th anniversary of the civil rights March on  Washington and Martin Luther King’s famous “I Have a Dream” speech. Martin wrote about C4GC members celebrating the occasion at a strip club. Douglas Adkins is the owner of gentlemen’s clubs in Greensboro where women perform seminude in return for cash.

“Bubba ended the performance with his rendition of Give it 2 U accompanied by the Puerto Rican girls and Isabella Adkins …” the law suit states in reference to Martin’s writing. Bubba is a reference to conservative activist Bob Grenier of Greensboro, one of the more vocal supporters of C4GC and conservative politics in the local online community.

Reached by phone Monday, Martin said he planned a vigorous defense and had been in contact with multiple attorneys. He planned to commence a legal defense fund soon.