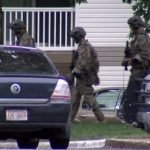 K. E. Krispen Culbertson, attorney for Yasseen Eltahir says Eltahir will now be bound over for a civil hearing to determine the course of his treatment for mental illness. (Reference)