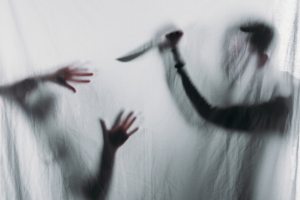 HIGH POINT – A judge was not moved to leniency Monday after testimony that a man who shot one housemate and killed another suffered severe depression that stemmed from childhood illness and being unable to visit his son.

Albright said reduced murder charges against Lamm as apart of a plea arrangement were mitigating enough.

Lamm pleaded guilty, without admitting guilt, to shooting housemate Walter Davis in the arm and leg when he made disparaging comments about his girlfriend.

He then shot housemate Christopher Thomas Jarvis, 29, in the chest when he came to the doorway of a bedroom. Jarvis died.

The plea reduced the charges to second-degree murder and assault with a deadly weapon inflicting serious injury. Lamm also was sentenced Monday for an assault charge pending at the time of the shooting.

Further testimony indicated he battled severe depression after he was prevented from seeing his son. The depression was compounded with a substance abuse problem that led Lamm to a 28-day treatment program.

“They said you’ve got to practice tough love stuff, and that’s what it was – tough love,” said Betty Lamm, Kenneth’s mother. She later described photos of her son caring for his own child, who is 9.

“I think it’s a lot of things that have built up over his lifetime,” Betty Lamm told the judge.
Culbertson said all factors contributed to Kenneth Lamm’s limited ability to control his actions at the time.

“The defendant is a man,” Culbertson said. “He was not without his value as a human being. Mercy is appropriate.”

But Jarvis’ family, including his mother and Angela Brown, the mother of Jarvis’ son, said they thought the sentence was fair.

Brown said Jarvis may have had problems himself but that he was good at heart, loved his family and had regularly spent time with their 3-year old son.

“He knows his Daddy is in heaven,” Brown said.